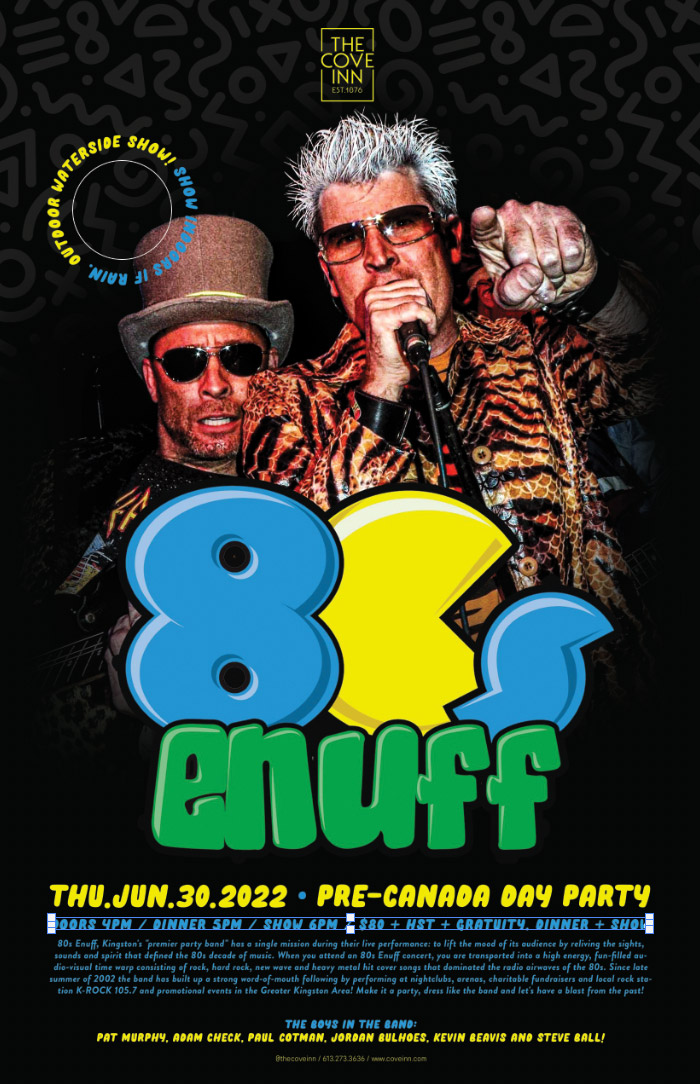 80s Enuff returns to The Cove Inn for an outdoor show as part of the “Pond Music Series.” Book your tickets now for a dinner and show on June 30th, 2022.

80s Enuff, Kingston’s “premier party band”, has a single mission during their live performance: to lift the mood of its audience by reliving the sights, sounds, and spirit that defined the 80s decade of music.  When you attend an ’80s Enuff  concert you are transported into a high energy, fun-filled audio-visual time warp consisting of rock, hard rock, new wave and heavy metal hit cover songs that dominated the radio airwaves of the 80s era.

The roots of the band lay in a friendship forged by four school chums, Pat Murphy, Adam Check, Brian Overvelde and Derek Cantarutti, while they attended Regiopolis-Notre Dame High School in Kingston, Ontario, Canada back in the late 1980s.  After playing together in various local bands for several years, these four individuals went their separate ways to pursue other endeavors.  One defining moment that initiated this separation was the near-fatal car accident of bass guitarist, Check.  Although this life-altering event could have been the end of Check’s musical activities, his persistence, determination and courage throughout his rehabilitation period eventually led to his successful recovery.  It was these same characteristics that propelled Check to reunite the core four members of ’80s Enuff in 2002.All that was needed now was a lead guitarist.

This void was soon filled by a local guitar virtuoso. His abilities, both instrumentally and vocally, were immediately evident, complementing both the strong vocal presence of Murphy and the piercing harmonies of Cantarutti.  With a solid rhythm section built upon drummer, Overvelde, 80s Enuff was now complete and could begin their revival of the “80s Greaties.”

One thing the guys noticed when deciding what classic retro songs they were going to revive, is that keyboards were a HUGE part of 80s music. They were lucky enough to discover Steve(o) Ball who is able to tickle the ivories beautifully and has become an integral part of 80s Enuff. Now that they had keys, the band’s repertoire increased ten-fold!

After a number of years rockin’ it retro, three of the guys decided to retire from the band. It looked like 80s Enuff was finished. However, since everyone still loves listening to the “eighties greaties” music, Murph and Check decided to continue with the band. However, now they needed a lead guitarist, rhythm guitarist and a drummer!

Murph and Check contacted a buddy they knew from high school to see if he was still playing the axe. He was indeed and so Paul Cotman joined 80s Enuff to play rhythm guitar. He fills the tunes perfectly and provides excellent background vocals.

80s Enuff then discovered an incredible drummer named Jordan Bulhoes who was playing in a number of local bands. Jordan jumped on board and now he keeps pounding the drums to keep the rest of the guys on time / in rhythm. He also provides excellent background vocals.

Now all that was needed was a new lead guitar player. The guys heard Kevin play a couple of gigs with some local bands and thought he would fit in perfectly with the band. Kevin has stepped up and become a strong part of 80s Enuff.

Since late summer of 2002 the band has built up a strong word-of-mouth following by performing at nightclubs, arenas, charitable fundraisers and local rock station (i.e., K-ROCK 105.7) promotional events in the Greater Kingston Area.

If you’re looking to put the “FU” in “FUN” and return your party to the retro years of the 80s, look no further!  You’ve just discovered 80s Enuff!

Pat Murphy and his band have been huge supporters of Friends of the Arena (FOTA) over the last few years when offering to play the annual FOTA fundraising event at The Cove!