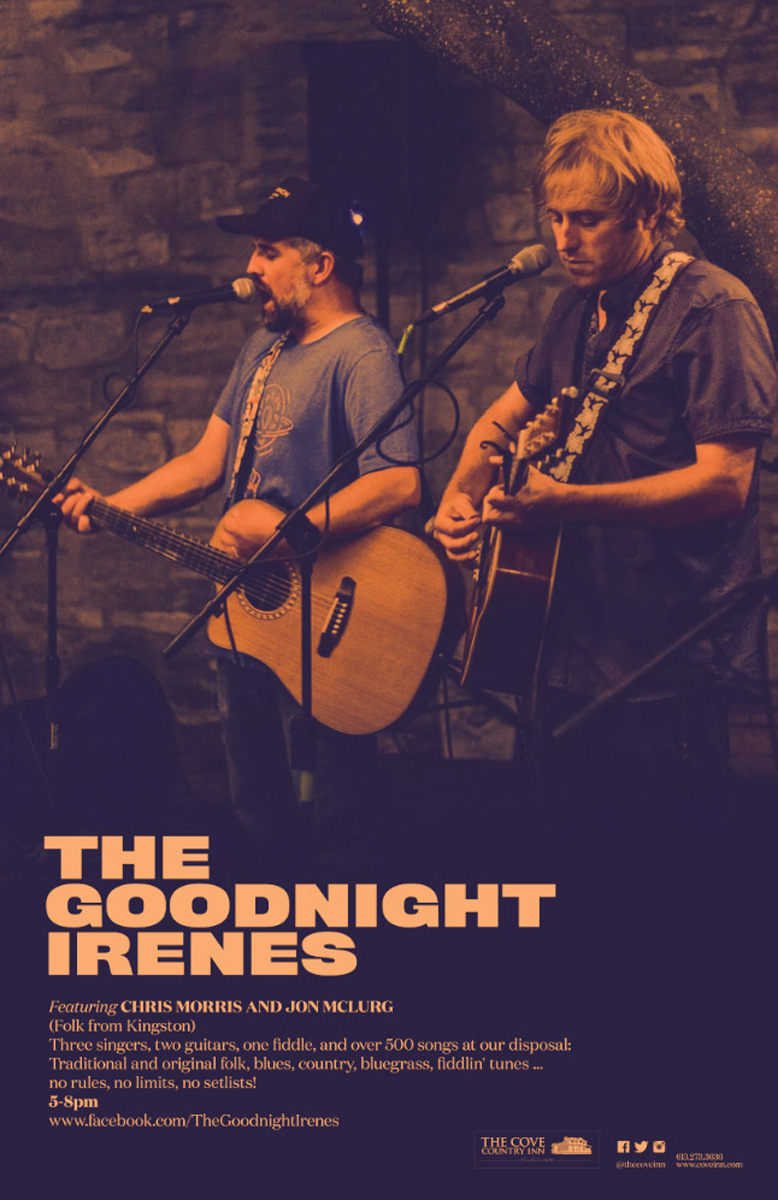 Join us for live music on The Cove’s Outdoor Patio on Monday September 5th from 5-8pm with the Goodnight Irenes.

The Goodnight Irenes are a longtime musical collaboration between friends and songwriters Jon McLurg and Chris Morris, now with a new name.

Chris Morris is a folk singer based in Kingston, Ontario. His music and high-energy performances encompass folk and other traditional genres from the Delta to Dylan, the plantations to the Appalachians, the Mississippi to beyond the Great Lakes. Folk, blues, roots, alt-country, singer-songwriter, bluegrass, spirituals – it’s all blended together and performed with a captivating intensity that will take you along the same versatile ride – feeling great, feeling bad, feeling hopeful, feeling lost, but glad to be a part of the creation of amazing music.

Chris began performing live at the age of 14. He recorded two albums of original material in the mid-90s as school projects, and several copies (of each!) were sold, and they have sadly fallen out of circulation, largely due to disinterest from both Chris and the general public. Chris was a member several rock bands throughout high school and college, but always maintained a strong repertoire of solo material rooted in folk and other acoustic-based styles. Always a champion of local and unknown artists, Chris started a concert promotion business in 2002: Rock Crew Productions. Rock Crew Productions produced over 250 concerts in 4 years, including Arcade Fire, Tegan & Sara, The Weakerthans, Serena Ryder, k-os and many more. Much of his focus throughout this time was on the business and his family, and it wasn’t until 2008 when the opportunity came to host an open stage, the Kingston Folk Club, that Chris returned to regular performing and writing.

Jon McLurg released his first solo project, “All These Things”, a collection of highly personal and insightful ballads. Drawing on a rich folk tradition and a diverse background of musical experiences, Jon has created an album of striking honesty and vision.

Reservations Preferred! Call 613.273.3636 or Email thecoveinnwestport@gmail.com for Reservations. Tables of 4 or more preferred for Maximum Safe Seating. Thank you for safely and responsibly supporting live music events at The Cove!