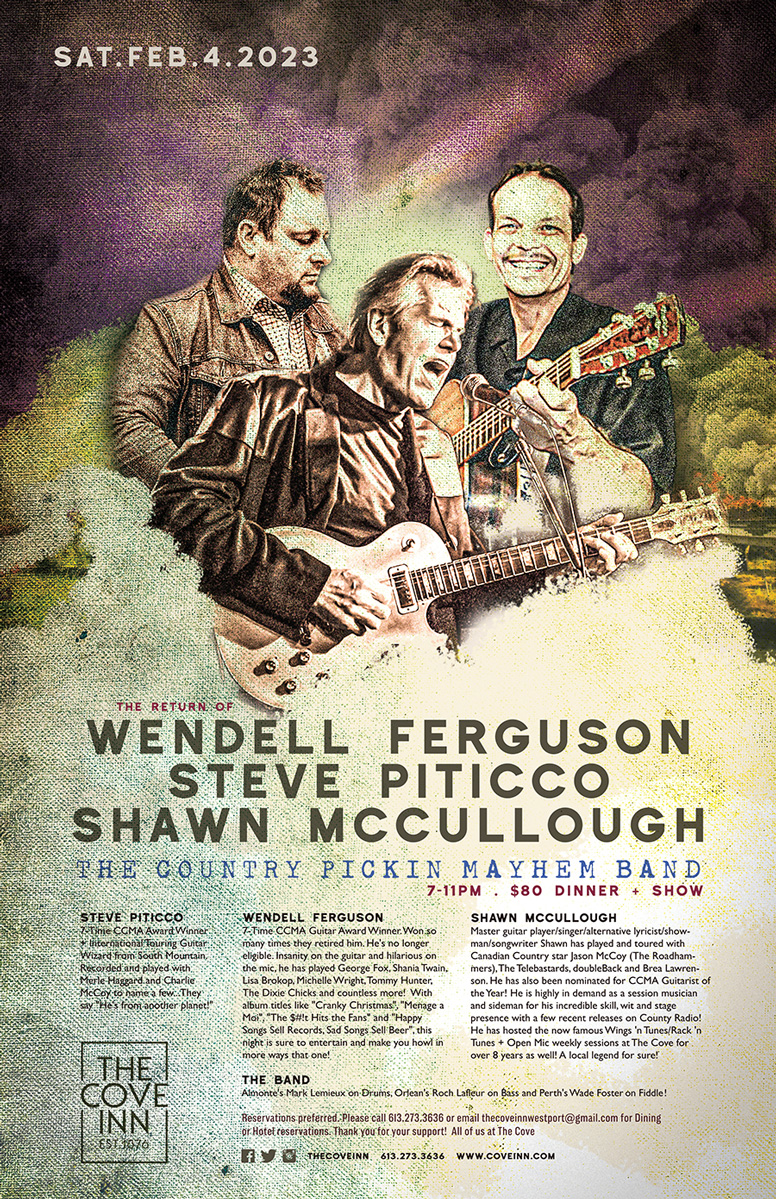 Back by popular demand! Three of Canada’s Top TELECASTER Country Guitar Pickers battle it off for an evening of true showmanship and guitar slingin’! Come to the Cove Inn for Dinner & a Show on Saturday February 4th, 2023 from 7-11pm.

WENDELL FERGUSON – 7-Time CCMA Guitar Award Winner. Won so many times they retired him. He’s no longer eligible. Insanity on the guitar and hilarious on the mic, he has played George Fox, Shania Twain, Lisa Brokop, Michelle Wright, Tommy Hunter, The Dixie Chicks and countless more! With album titles like “Cranky Christmas”, “Menage a Moi”, “The $#!t Hits the Fans” and “Happy Songs Sell Records, Sad Songs Sell Beer”, this night is sure to entertain and make you howl in more ways that one!

SHAWN McCULLOUGH – Master guitar player/singer/alternative lyricist/showman/songwriter Shawn McCullough helps you break up your work week and give you a little social fix. Shawn has played and toured with Canadian Country star Jason McCoy (The Roadhammers where he was nominated for CCMA Guitarist of the Year!) and has been a part of Telecaster supergroup The Telebastards featuring Steve Piticco, as well as a member of doubleBack with Wade Foster and John Wilberforce. He is highly in demand as a session musician and sideman for his incredible skill, wit and stage presence. He has a solo record to his name “This is Me” with a few recent releases on County Radio and is currently performing with rising CMAO and CCMA nominated Country star Brea Lawrenson! Of course, Shawn has been the host of the now famous Wings ‘n Tunes/Rack ‘n Tunes + Open Mic weekly sessions at The Cove for over 8 years as well! A local legend for sure!

THE BAND consists of Wade Foster on Fiddle (Johnny Reid, Brea Lawrenson), Almonte’s Mark Lemieux on Drums (Johnny Reid) and Orleans’ Roch Lafleur on Bass (Rory Gardiner). Shawn is calling this one his DREAM GIG. See you at the Show!