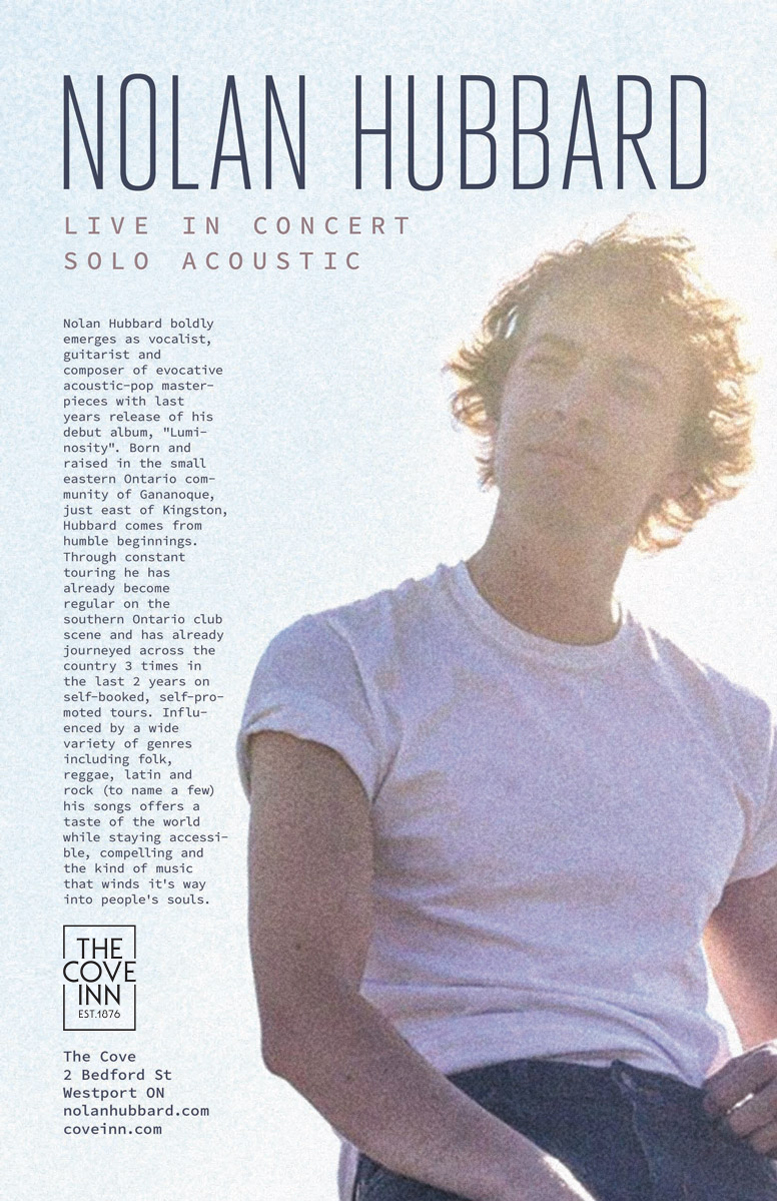 The story of Nolan Hubbard is a story of travel and motion. It’s about a years-long, continent-spanning adventure of self-discovery and self-improvement that he continues on to this day in pursuit of his dreams. It’s about the unstoppable compulsion he has to learn and experiment artistically. Above all, it’s about taking souvenirs from the people and places he has visited and integrating them into the stylistic core he developed back home.

Home is the small Ontario town of Gananoque, where Hubbard got his first guitar at the age of 11 and spent the following years teaching himself to play the guitar and write songs. After graduating high school in 2015, he made the first move that would turn out to be part of the pattern that would define his career to this point: he packed up everything and moved to the GTA. This is where he really came into his own, developing a distinctive style of soul-pop with raw, honest lyrics, influenced by such personal favourites as John Mayer, Jack Johnson, and Jason Mraz.

Hubbard’s hard work at developing a presence in the eastern Ontario scene and creating a unique sound soon paid off. By the age of 20, he had put out his debut album, in collaboration with veteran producer Doug Romanow and a talented group of Nashville-based session players. The record, Luminosity, received radio play on the CBC, college stations, and on a variety of local stations in towns where Hubbard is a club staple. By 2017, Hubbard was playing 200+ shows a year. Between 2017 and the present day, he has toured across Canada four times. In 2018, he began diving heavily into production and session work, starting a conscious effort to explore new styles and genres with collaborators. He has continued becoming a formidable guitar player & singer in his own right, spending countless hours honing his craft on stage alone and accompanying others, studying theory alongside peers from backgrounds like Humber College and York University, breaking into the Toronto session scene and teaching lessons privately, as well through a number of companies/schools.

This, however, is just the beginning for Nolan Hubbard. He says, “Early on, I had it in my head that I was just supposed to play my guitar with a live band behind me, like some of my all-time heroes. That’ll always be something I’m passionate about, but I’ve also been accepting that the music and artists that I love to jam to in the car come from a lot of different backgrounds like alternative, indie rock, pop, hip-hop etc. A bunch of them also produce and record their own music. I’m not so worried anymore about fitting in a genre-defined box and just being the solo acoustic artist. I want to take what I do with my guitar and mix it with the kinds of music that I listen to in my personal life. I’m excited to see where that takes me”.

Equally, 2019 has been a time of learning and reinvention for Nolan Hubbard the lyricist. Luminosity is a project infused with a sunny optimism, as the name implies. While that undoubtedly remains an important part of Hubbard’s personal energy and outlook on life, he is also eager to explore other emotional registers with his coming releases. “I’m generally a pretty positive person. That’s probably always going to shine through somewhere in my music, but I don’t want to hide the other things that I sometimes feel anymore. I’ve never been huge for metaphors, I’m usually pretty honest and to the point. I think as I’m going through experiences and figuring out who I am, my music is changing too” he says.

Hubbard’s latest singles, “This Year” and “Alpha” were released at the start of 2020 and reflect that growth in direction. It is hard to imagine this man ever deciding that he’s finally reached his destination, but as long as he and his audiences continue to have this much fun with the journey, that should be more than enough to keep everyone along for the ride. Expect more music and content throughout 2020 and onwards.

Reservations preferred! Call 613.273.3636 or Email thecoveinnwestport@gmail.com for to book now. Thank you for safely and responsibly supporting live music events at The Cove!