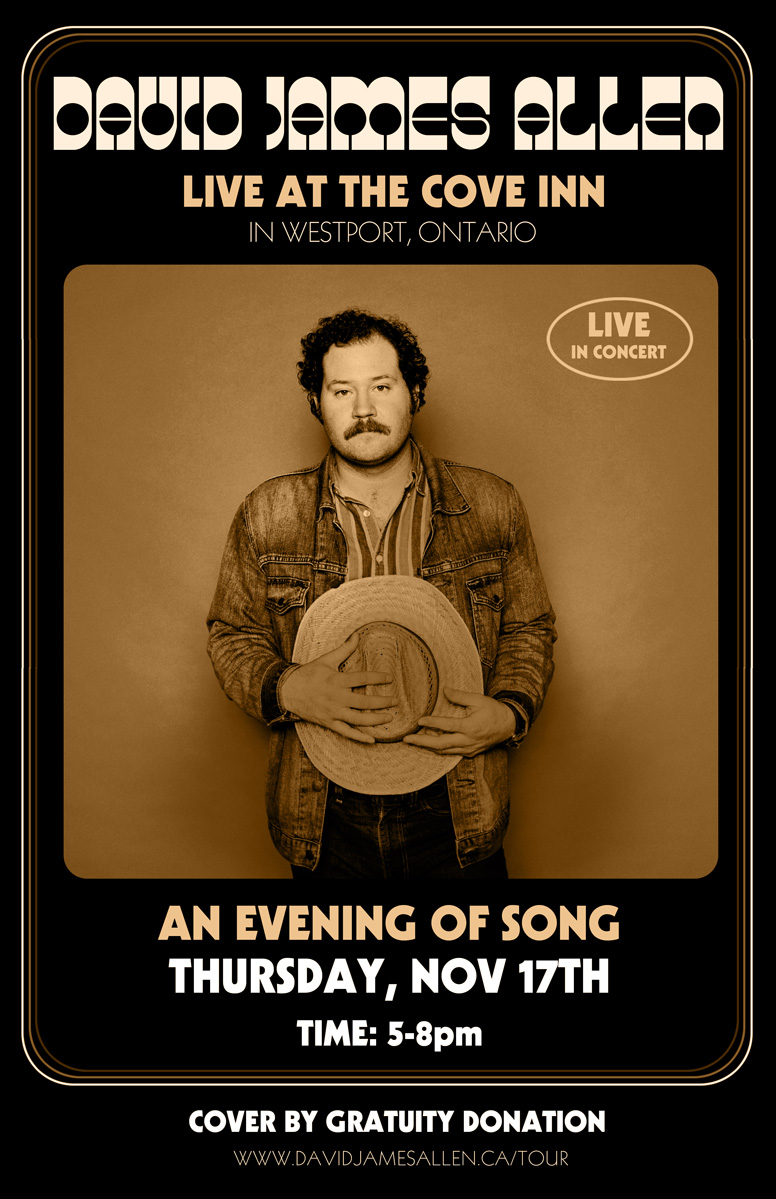 Join us for live music at  The Cove on Thursday November 17th, 2022 from 5-8pm with David James Allen and an evening of song.

When David James Allen was in his early-twenties, he came up with the idea to name an album The Architect. He wrote its title track which, inspired by his struggle with imposter syndrome, questions if there’s an outside power in control of his life. But then Allen shelved the song and the album idea. He went on to release material with the now defunct rock band Stonetrotter and two albums under his own name: 2017’s When The Demons Come and 2020’s Radiations. For the latter release, awashed in psychedelic tones, Allen wrote, recorded, created the artwork for, promoted, and released one track a month for ten months during a global pandemic.

Nearly ten years later, Allen found his way back to The Architect (out November via Garment District Records). Across the album, Allen tells almost a decade’s worth of stories that touch on politics, love, making music, and the journey Allen took to take control of his life. On “Please Let Me In,” Allen sings about a character who finds love and understanding in spite of his flaws and on “Unsatisfied,” Allen grabs hold of his own joy: “I’m on the mend/I’m building up my self-esteem,” he sings. Even when Allen, inspired by long days on tour, sings on “Bound To The Game” about being ground down by capitalism, it serves as a reminder that you are not struggling alone. “Putting the songs all together now,” Allen says about The Architect, “I felt acceptance and love.

The Architect ranges from bluesy alt-country to easy sounding folk and country songs influenced by the simplicity of Willie Nelson’s Stardust. For the first time as a solo artist, Allen decided to co-produce the record and brought William D. Crann [Mappe Of, The Trews, Wild Rivers, Iskwe] on board. The Architect was largely recorded live off the floor at Catherine North Studios in Hamilton, Ontario and its buoyant opening track “For The Times,” the first song to come together, captures the joy and spontaneity of the recording session. There’s a warmth to The Architect that mirrors the community that Allen hopes listeners find in the album.

“I want people to look into themselves and to pay attention,” Allen says about The Architect. “When I write a song, I want it to work on many different levels for different people and I try to get to the core of an emotion that a lot of people have experienced so they feel less alone. I want to make somebody feel like they are connected and not isolated.”

“My door is open,” Allen sings on The Architect. “you’re welcome inside.”