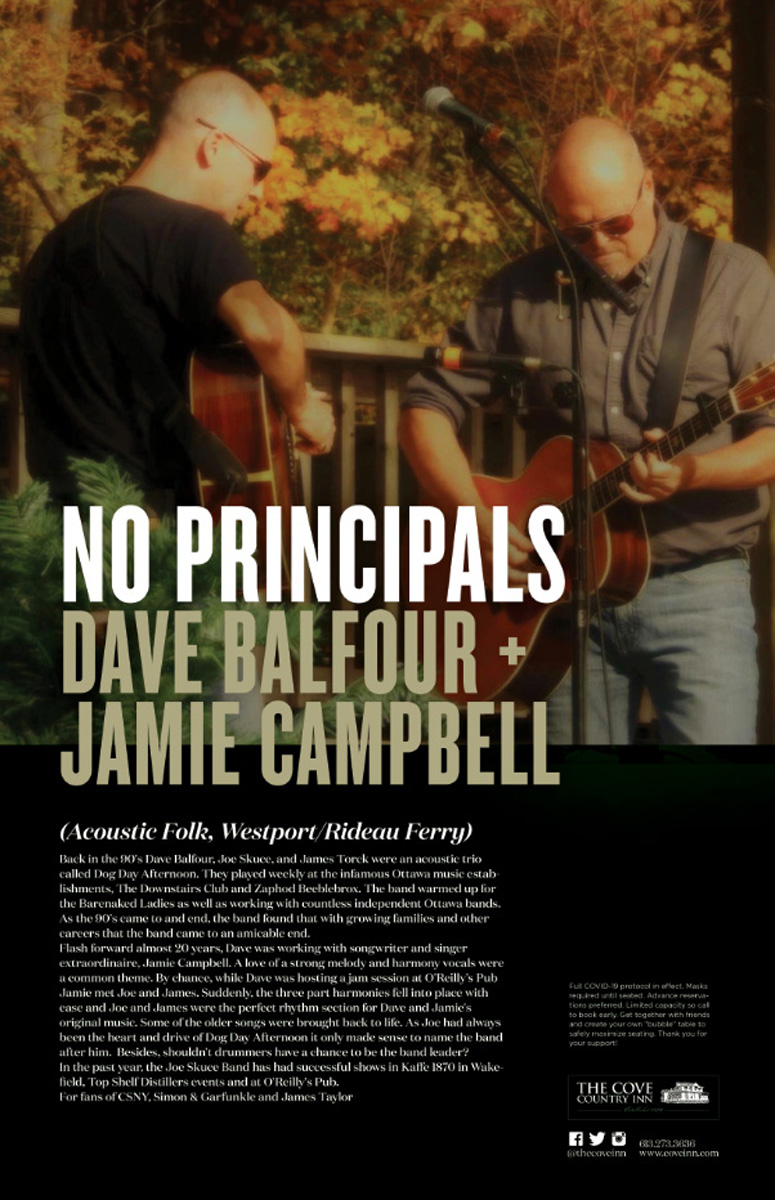 Join us for live music at The Cove on November 3rd, 2022 from 5-8pm with “No Principals” featuring Dave Balfour & Jamie Campbell.

Dave Balfour is a real and vivacious musical personality! He reels you in! He has been the MC of Stewart Park Festival in Perth for 18 years and hosted the Wednesday night jam at O’Reillys in Perth for over 10 years, bringing in a mix of young and old local talent each week. Each week Dave and guests would play a for a few hours of acoustic magic and mayhem with weekly new material keeping musicians on their toes. This larger than life man, with a sweet soft voice will have you tapping and humming along to your favorite tunes from the likes of Dave Matthews Band, Little Feat, U2 and The Beatles. He has played with Dog Day Afternoon (with Jamie), Guthrie House, Bald Like Dad and more.

Jamie Campbell has quite a prolific past in the music business as well. He is a member of Fireweed with Gary William Rasberry & Rob Unger. Voiceplay, guitarwork and a mutual love of all things acoustic fire the songs that we write and perform. Fireweed’s reputation for heartfelt, intimate live shows is wide-spread and well-known. They’ve performed at Blues Skies Music Festival, Summerfolk, Stewart Park Music Festival, the Ottawa Folk Festival, Mariposa, Hillside Music Festival, Skeleton Park Music Festival and the Amherst Island Folk Festival. He was also a member of acclaimed Quebecois performer Roch Voisine’s touring band! A high accomplishment for sure. Most recently, he has been playing the co-lead with Miss Emily Fennell and Doug Reansbury is a sensational tribute to the music of Carole King and James Taylor called You’ve Got a Friend featuring the best in Kingston’s musical veterans in Zak Colbert on bass, Ken Hall on keyboards, Duncan Holt on drums and James Wannamaker on sax.

Together, Dave and Jamie share a love of a well crafted song and strong harmonies.  Together they play with the band Dog Day afternoon. They will be performing a trio acoustic show featuring Joe Skuce on drums. Both Dave and Jamie are elementary Principals in our area but fear not, no detentions will be given.

If I Had a Boat -Lyle Lovett

The Weight -The Band

Save it for Later – English Beat

Thick as a Brick /Skating Away – Jethro Tull

A Day in the Life – The Beatles

Things We Said – The Beatles