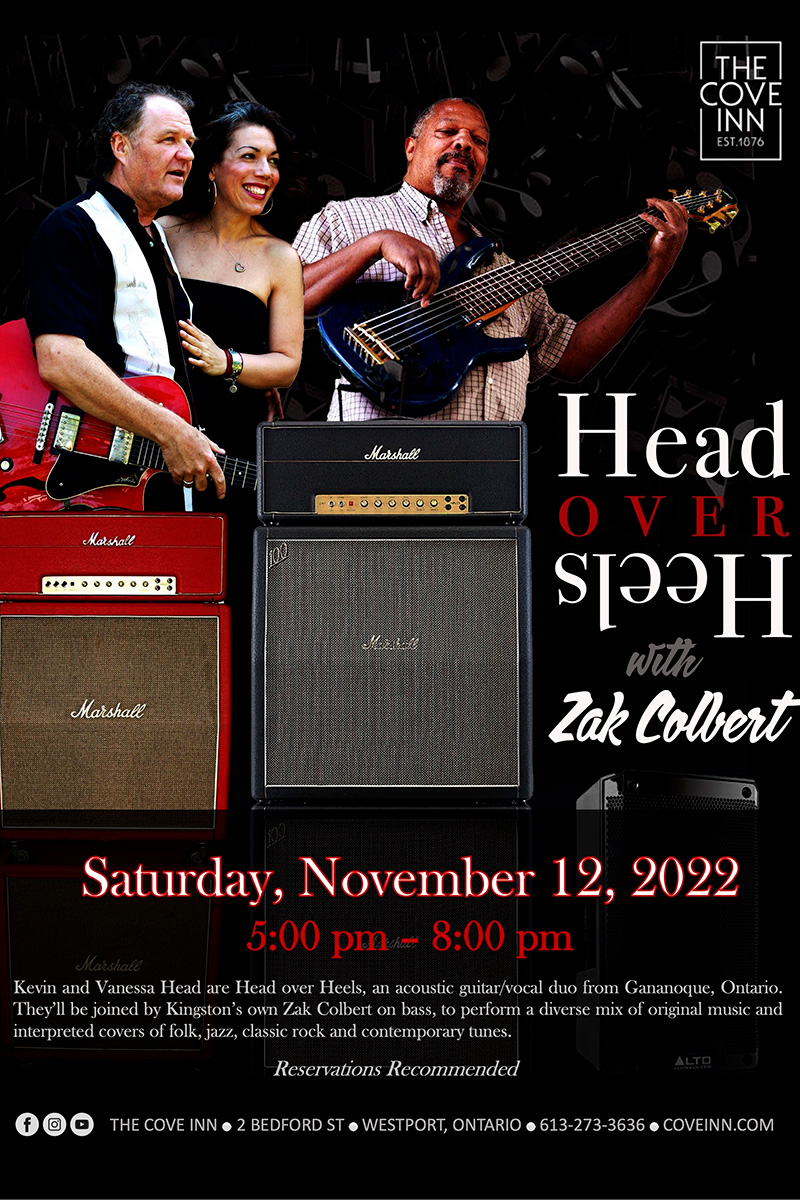 Join us for live music at The Cove on Saturday November 12th, 2022 from 5-8pm with Head over Heels and special guest Zak Colbert.

Kevin & Vanessa Head are Head over Heels, an acoustic guitar/vocal duo from Gananoque, Ontario. They’ll be joined by Kingston’s own Zak Colbert on bass, to perform a diverse mix of original music and interpreted covers of folk, jazz, classic rock and contemporary tunes.

HEAD OVER HEELS (Gananaoque, (Vocal/Guitar Duo) Kingston’s Kevin Head is an accomplished singer, songwriter, musical director and actor. Formerly from Nova Scotia, where he still has close ties, and once called “The Original Salt Cod Cowboy”, Kevin toured extensively throughout the Maritimes with bands, theatre troupes and as a solo performer/singer, songwriter. He has performed in shows with Valdy, Charlie Major, The Rankins, Gowan, opened a cross-Canada tour for Chris DeBurgh, acted on stage with the late Denny Doherty, and over the years has had lovely musical contributions on his recordings from Ken Pearson (Janis Joplin, Bruce Cockburn), Willie P Bennett, and Kate McGarrigle. Kevin’s most recent appearances include a mainstage appearance at the 2012 Blue Skies Festival in Clarendon, hosting the 2012 edition of Liner Notes Live Songwriter Circle, 2012 Limestone City Blues Festival, opening for Alex Cuba with the Bob Robertson Trio as part of the Limewire music series in 2011, and numerous solo appearances and performances with his duo “Head over Heels” in the Kingston, Gananoque and Westport areas. He released a new CD of LIVE material recorded October 2013 with his band and life/musical partner MISS V with whom he performs regularly here at The Cove!